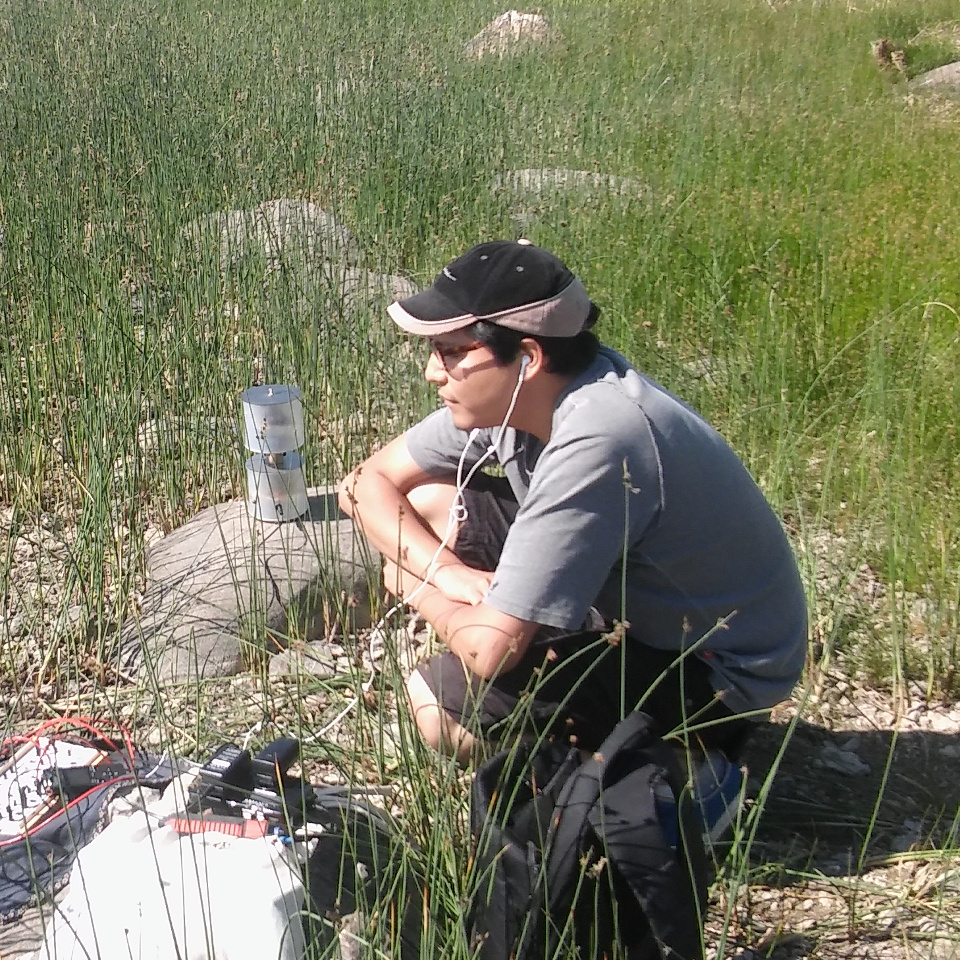 BioSignals project is a series of site-specific events that has explored the overlaps of sound art, narrations and nature-based data streams by human and non-human cultural producers involving Pixelache members and other invited guests, that began in Spring 2018.
On Saturday 25.5. 14:30-17:00, with a programme themed as ‘Augmented Listening for The Bio-Community’ (* see below) in which devices that sample and amplify signals from such processes as CO2 circulation, soil respiration and photosynthesis, as well as elemental wind, electromagnetic frequencies and fluid ecosystem of swamps will be introduced by artist-researchers Teemu Lehmusruusu, Krista Dintere, and Juan Duarte as a combination of presentations and a picnic type outdoor listening event.

This event, Aeolian Artefacts Picnic, features an informal presentation by Juan Duarte among others that takes place near to SOLU in Katajanokka, leaving the gallery at 15:30.  Free vegan picnic snacks will be provided for the first 20 people.

Juan Duarte, artist-researcher
Aeolian Artefacts Picnic, 2019.
A sound device that enables an experience of Augmented Listening of wind forces, in which subtle changes in an outdoor environment drive generative soundscapes. The use of wind-sensitive systems, are used to detect orientation and speed of the wind, and acoustic events, that are registered and processed as a generative sound piece by a network of sensor networks. The work takes as a reference an ancient instrument that is known as the Aeolian Harp (cf. Kircher, A ca 1650.), that was used as an object that enabled holy spaces, such as mountains and temples, to "speak" with human beings, according to a mechanism that self-played through strings and resonators by the aleatoric forces of wind.
Within the audio archive there is this an audio-visual presentation of BioSignals, an ongoing documentation that registers the interventions produced with the device and field recordings to review the outcome from experiments between soundscapes, radio signals, and live sonification of sonic events. The locations of recordings include Virtsu - Estonia, and Soca - Slovenia, between June to August 2018. For the culminative event of BioSignals programme, Mikko Lipiäinen proposed a picnic, to invest some attention also to the nearby Katajanokka soundscape.
Juan Duarte Regino, Mexico City (1985), media artist statement: I work on interactions as a tool for generative art experiments . The exploration of digital and analog platforms as agents to transform that express sonically and visually materials. Meanwhile, a hybrid engagement between environment, users with artefacts and interfaces can work to explore new realities. The exploration of sonic experiences put in public space may bring an opportunity for a ludic and cultural approach on technological exploration. My work has been presented in CTM Festival 2015, Spiral Gallery,, AAVE Festival, Bonniers Konsthall, Rundum Showcase, ICLI 2014 , Ljudmila, Radio and TV Museum of Lahti, Centre for Contemporary Art - Ujazdowski Castle, Mänttä Art Festival. Since 2014 I am part of Pixelache - art and activist group based in Helsinki. Bringing media art practices for social engagement, and technological appropriation.
For more information about Aeolian Artefacts see: http://juanduarteregino.com/Artefactos-Eolicos

/// AUGMENTED LISTENING FOR THE BIO-COMMUNITY

When situated in a landscape, Juan Duarte's Aeolian Artefacts, Teemu Lehmusruusu’s Maatuu uinuu henkii (Respiration Field), and the Swamp Radio project can be considered as examples of an artistic and scientific instrument that function as potential communication media between agents in a surrounding ecosystem. As such they make an intentional gesture comparable to bird song that is exposed to not only one species, but to possible inter-species meaning-making.
By translating its surrounding signals into others, the Aeolian Artefacts' interface generates a musical blend of environmental forces and sounds, becoming a potential communication and mis-communication device between multiple agents and species. What is communicated then? Although the Aeolian Artefacts - and the aeolian harp which it refers to - has its sphere of meaning among human culture that directs its human interpretation and use (as a device deepening the human-nature relationship with a certain esoteric dimension it is used as part of a ritual, a moment of contemplation of invisible forces made audible), its interfaces with other spheres of signification, including non-human ones, make one wonder whether it can resonate with other species' minds as well? In order to do so, what should the harp communicate?
If, in the case of the Respiration Field, the ‘breathing’ of the soil is something that we can sense aurally and visually, does it help us humans find affinity or attention to this fundamentally important ecosystem process? How might other beings or systems adapt with this stimulus? It is also about relations and causualities. From an anthropocentric, or human-centered point of view, we seem to find it interesting and delightful that also soil breathes, when the case is, much more accurately, that we humans breathe also. The modern era's idea of human's separateness from ‘nature’ sits tight in our everyday perceptions, and we need to work on it habitually.
On a much more abstract level Krista Dintere's contribution to Swamp Radio project can be seen as giving a voice to species misheard by the naked ear. By using hydrophones (hearing under water), contact microphones (hearing vibrations in matter) and amplification of signals in the form of field recording the sound composition becomes a tool for broadcasting live and living signals from the wetlands. The process of sampling and adding an artistic level of interpretation of the signals in studio brings the ecosystem of a wetland more comprehensible and evokes imagination and empathy towards other species.
(Collaboratively written by Mikko Lipiäinen, Teemu Lehmusruusu, Krista Dintere and Andrew Gryf Paterson)
///
/// BIOSIGNALS /// SOLU, Luotsikatu 13, 00160 Helsinki Finland , Katajanokka /// 25.05. /// 14:30 - 17:00 ///