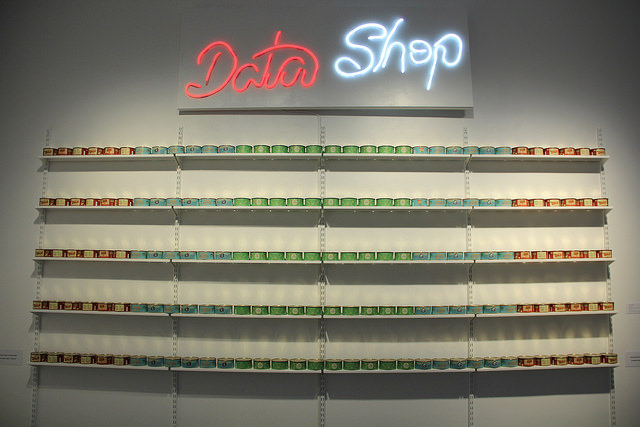 Data Canning Workshop with Varvara and Mar is a workshop for up to 30 participants. The workshop is free of charge you can reserve your spot through our Eventbrite page.

The workshop has been inspired by the duo's art project Data Shop, which questions the privacy of personal data and growing monetization, and hence, also surveillance. The project intends to reclaim the rights of data, and at the same, adapts the business model of surveillance capitalism, where users and their online activity are seen as an opportunity for business and influence. It is aimed to open the discussion around the data transparency and how companies like Facebook, Twitter, or Google use the user’s information.

During the workshop, the participants are invited to map their data and discuss the constant state of surveillance in the times of Information Age. In addition to that, each participant has a chance to make a can with their data whether it is from Facebook, Twitter, Fitbit or something different.

Varvara and Mar is an artist duo formed by Varvara Guljajeva and Mar Canet in 2009. Often duo’s work is inspired by the digital age. In their practice, they confront social changes and the impact of the technological era. In addition to that, Varvara and Mar are fascinated by kinetics and participation, which are integral parts of their work.

Varvara Guljajeva (born in Tartu, Estonia), has a PhD in art from the Estonian Academy of Arts. Her dissertation “From interaction to post-participation: the disappearing role of the active participant” can be found here. Varvara has also a master’s degree in digital media from ISNM in Germany and a bachelor’s degree in IT from Estonian IT College.

Mar Canet (born in Barcelona) has two degrees: in art and design from ESDI in Barcelona and in computer game development from University Central Lancashire in the UK. He also has gained a master’s degree from Interface Cultures at the University of Art and Design Linz. In addition to that, Mar is a co-founder of Derivart and Lummo.